The first post in this series explained I'm currently involved with the qualifying round of the NASA Space Robotics Challenge - Phase 2 (SRC2). The competition requires controlling the rover to the right. It uses Explicit Four Wheel Steering which allows the orientation of the wheels to be independently changed, This provides multiple ways for the rover to move, e.g. straight, crab, turn, pivot.

The challenge is there is no controller for the rover in the Robot Operating System (ROS) because the rover wheels are controlled by effort, not the typical speed control.
This article address the geometry of controlling the rover when it is turning. The diagram below illustrates the rover making a counter-clockwise turn around the Instantaneous Center of Rotation (ICR). The arrows represent the wheel orientation. The dotted box is drawn proportional to the wheel base and track of the rover. Note the orientation of the X/Y axis which is ROS standard for robots. 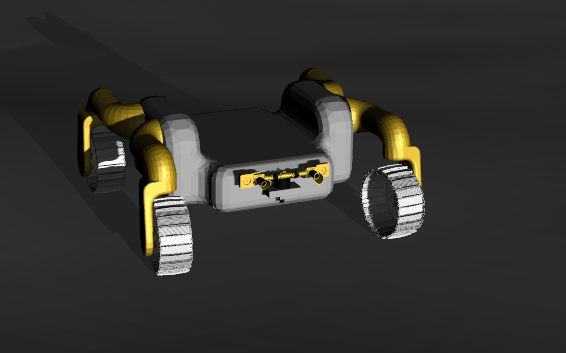