I spent today at the a local science fair event. There are more of them spread over the next few weekends. Today's had an elementary school festival and science / math bowl competitions. Next week is the Junior High and, the week after, the Senior High Engineering Design Competition. These both involve building robots.

There was also a robotics demonstration today  and I volunteered for it, naturally. The main activity was the Texas Torque team demonstrating their robot, which won last year's FIRST World Championship. It also was one of the teams leading the Macy's Thanksgiving day parade last November. Last year's challenge was to throw Frisbees through rectangles at one end of the arena.

Not only is the robot impressive but so are the team members. I spoke with Robert and Matthew, mainly, but a couple others approached me to see if I had questions. This competition is for high-school students and, to be blunt, you have to be impressed by their poise and ability to engage with adults and children about their team and robot. 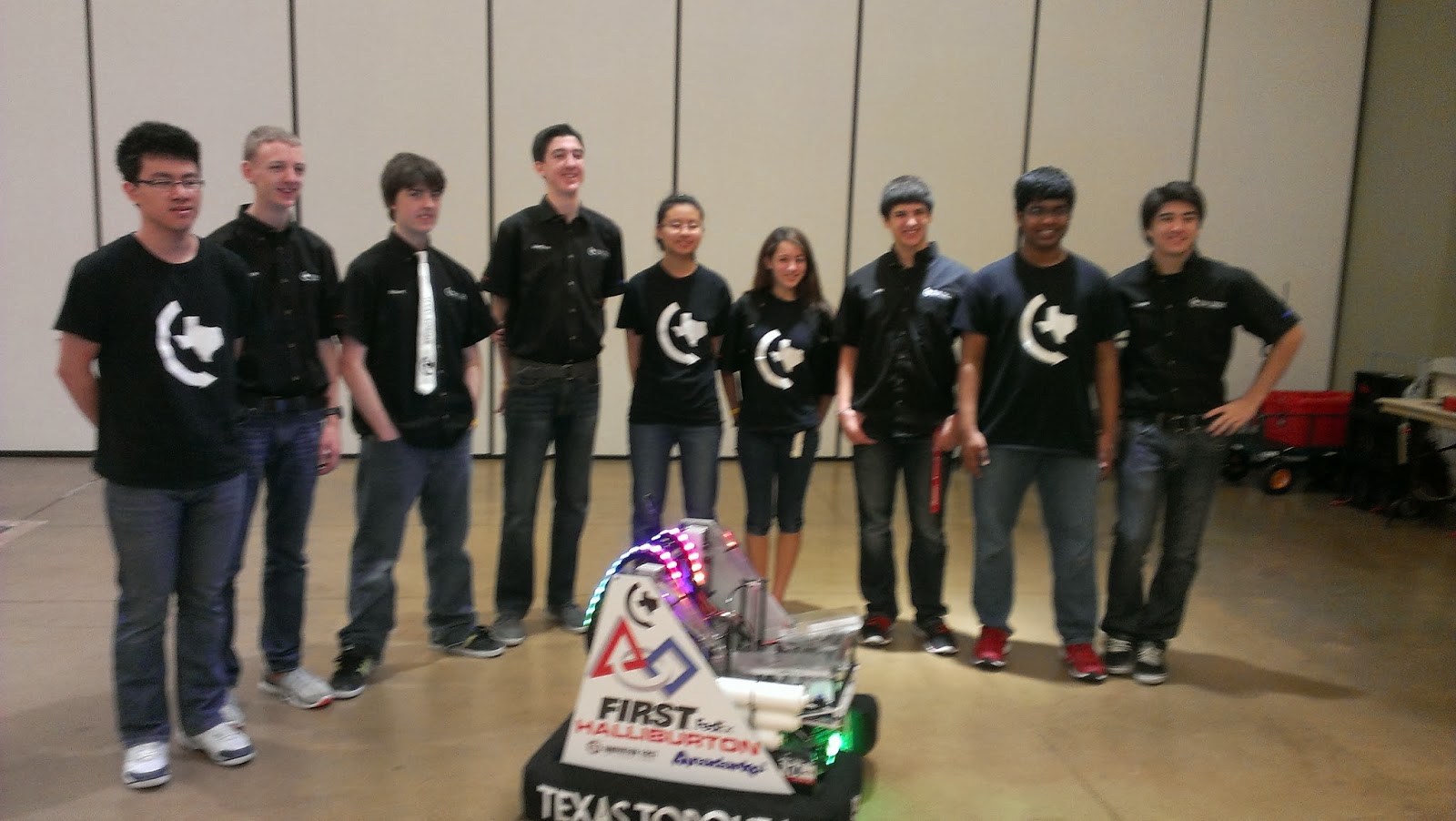 I spoke also with one of the fathers and he related how these young people had to learn to work together. They are all very smart and quite used to having correct answers. Obviously when building a robot like this all their answers cannot be correct so a big learning experience is compromising and considering other ideas.

Participating in this team provided experience in team-work that most students only get through organized sports in high school. Unfortunately in Texas that also comes with adulation that is not always beneficial. This team experience is more beneficial, I believe.


It is 120 lbs of compact engineering, all built in a 6 week period. Each year the challenge is announced early in January and the teams have 6 weeks for construction. Then there are 6 weeks of competition. 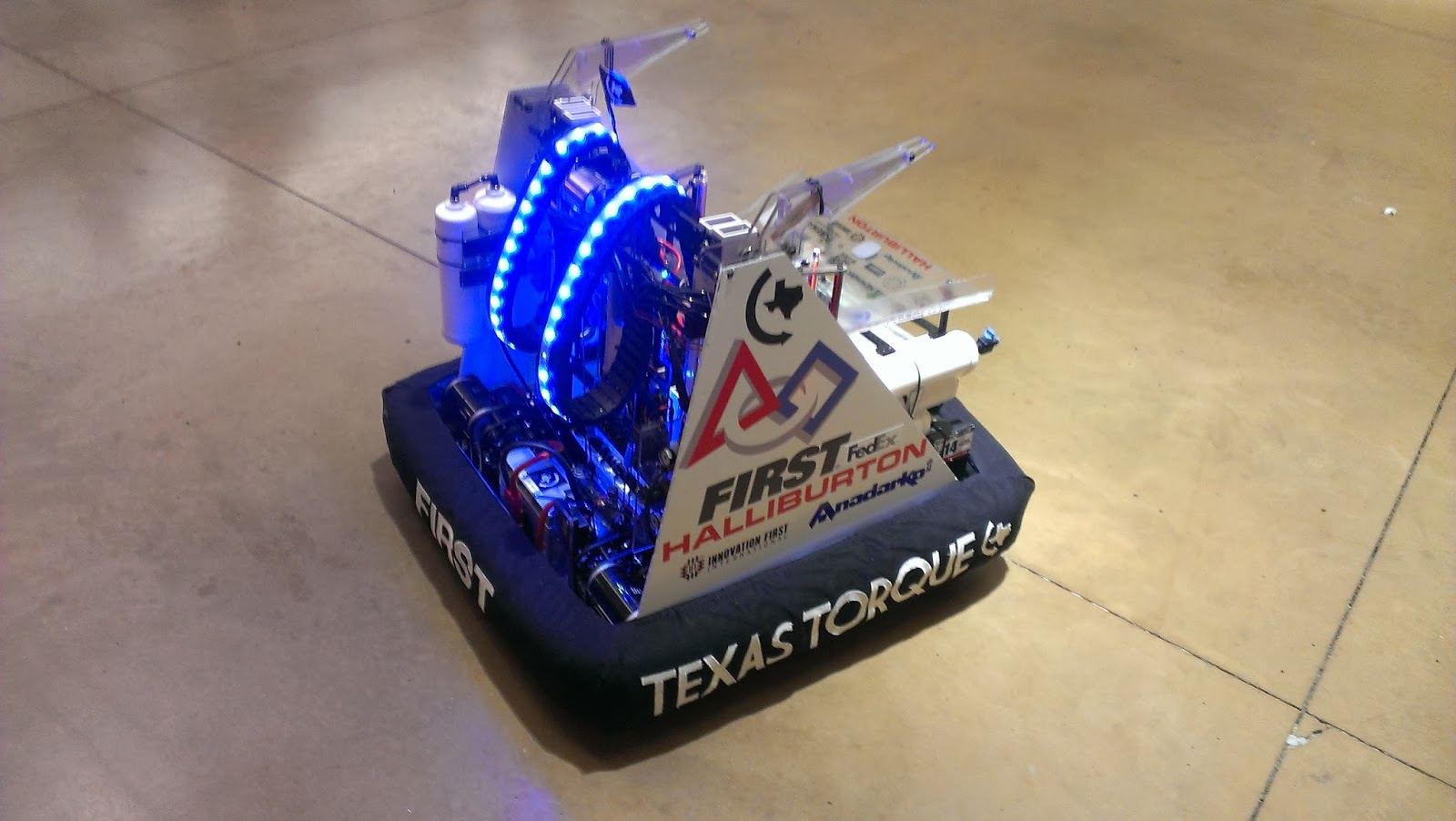 The first aspect of the robot you will notice are the two strips of multi-colored LEDs that run up the back, over the top, and back down. You literally cannot miss them. They flash and change colors  to provide the driver with the status of the robot. For instance, is there a Frisbee loaded and ready to shoot?

The next obvious thing is the speed. It fast but maneuverable. The maneuverability was obtained through a design decision to keep the robot short. But this led to another problem. Many teams, especially in Texas, have a strategy of blocking other robots shots. So Torque fixed those other guy's little red wagon by adding an elevator which lifts the shooter above the other robot. Good strategic thinking.

The robot is controlled from joysticks connected to a laptop, although Robert, the driver, uses a modified RC car controller. The laptop sends control signals using 5 GHz WiFi. Again, this was a conscious design decision because (1) some locations block 2.4 GHz ad-hoc WiFi connections and (2) that frequency is less likely to be hacked by another team. (<Sigh> that they need to worry about this.) 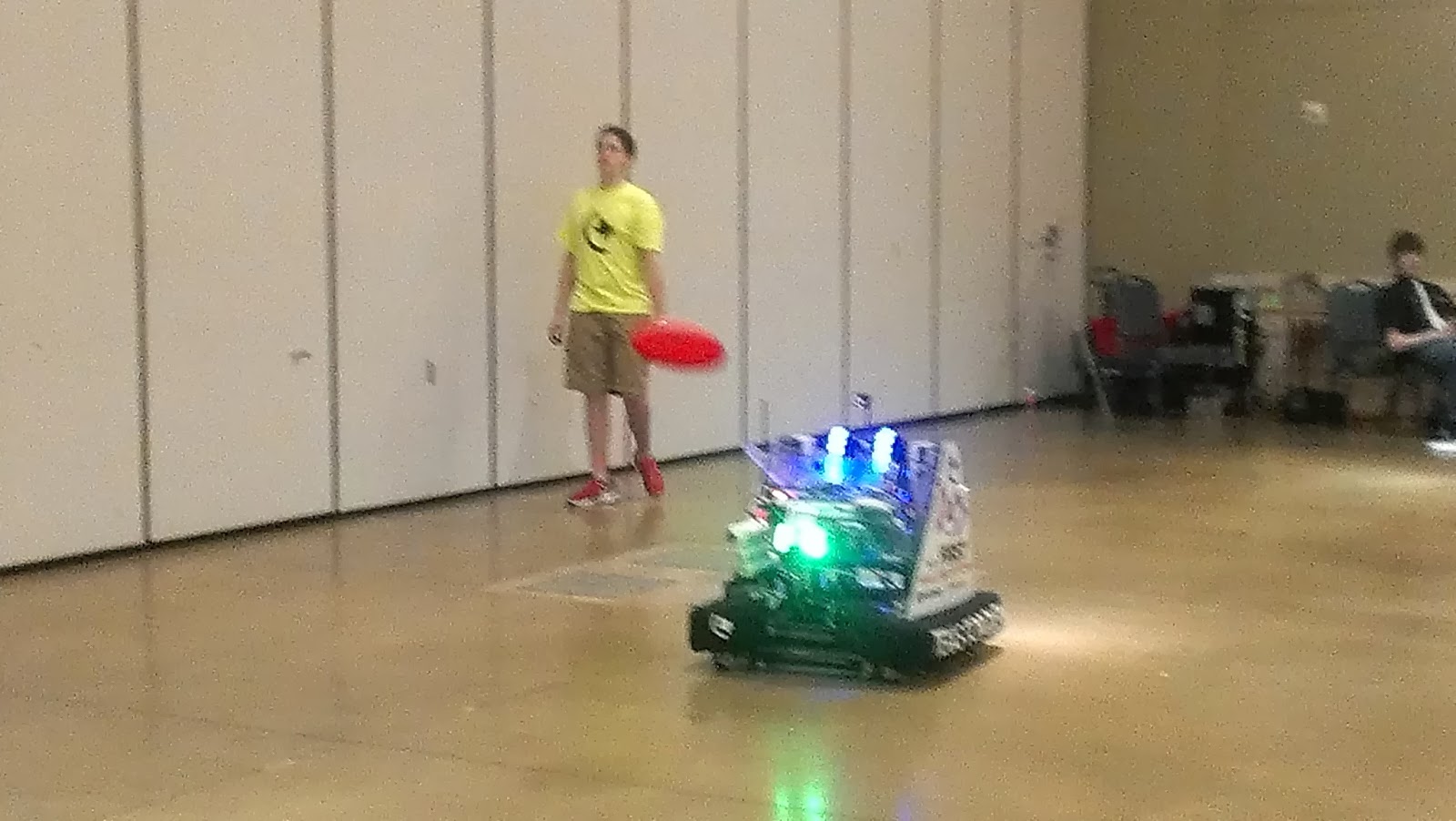 The robot is controlled by the driver but they offloaded a number of tasks onto the computer to simplify his job. It is fair to describe the operation as semi-autonomous. For example, there is a camera on the shooter bracketed by very bright LEDs. The rectangular target area is bordered by reflective tape and the LEDs make the outline very clear for the camera. Software detects the rectangle and adjusts the shooter's position automatically.

Twice during the demonstration there were problems. A gear stripped in the shooter mechanism and a wheel came apart. They quickly fixed the problem once the parts were available - they had to send someone for a replacement gear since they could not bring the entire shop to the demonstration. So not only did the robot work well but they attained a certain level of maintainability. Very important if something breaks during a competition.

There are many other impressive features but I will only mention one more. It may not seem like much, but a good design feature was the ease of loading Frisbees. I watched the team members load Frisbees by just tossing them casually into the hopper. There were only few jams and bad loads over the 6 hours they ran the robot, which is not bad. The team even had small children loading Frisbees without any problems. (Yes, it was safe.)

Team Torque is as impressive as their robot and they can rightfully take pride in their accomplishment. Nice job!